New features and support for Android 12 and iOS 15 with the new conpal LAN Crypt v2.0 for Android and iOS

New features and support for Android 12 and iOS 15 with the new conpal LAN Crypt v2.0 for Android and iOS

In June, we introduced the conpal LAN Crypt clients for Android and iOS, bringing our enterprise encryption solution to the world of mobile IT. Now, with version 2.0, both of our mobile apps receive extensive feature enhancements enabling users to work even more productively and securely. They are also compatible with the latest operating system versions: Android 12, iOS 15 and iPadOS 15. 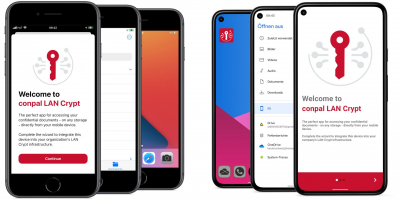 The biggest innovation is certainly the ability to now store files directly on the mobile device in encrypted form. Whether on the iPhone, iPad, Android smartphone, or tablet – both when saving previously encrypted files or when creating them for the first time, your data is protected from the very first second.

The ability to view the encryption status of files adds to the ease of use and transparency. The new version 2.0 also supports the verification of assigned keys. The default encryption key can be displayed and selected, policies and certificates can be validated.

Customers having used Sophos SafeGuard Enterprise (“SGN”) File Encryption for file protection previously or are currently using it in parallel with conpal LAN Crypt will be particularly interested in the following feature: Version 2.0 is able to work with SGN encrypted files and decrypt them transparently.

There are also innovations on the administration side. For example, the assignment of the default encryption key as well as the policy check can be implemented company-wide via MDM (Mobile Device Management). Samba shares are now also supported.

Additionally for Android, a new feature is added: native support for Microsoft OneDrive.

Tweets by theme_fusion
For privacy reasons Twitter needs your permission to be loaded. For more details, please see our Data protection.
I Accept